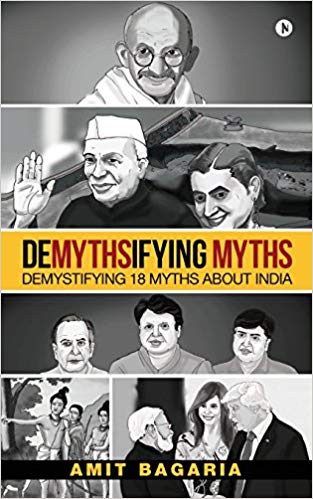 A fundamental rule of life is believing what you see.
Forget it, in the world of media, it has been obsolete. We can be shown whatever someone wants and then we easily can be manipulated. Amit Bagaria has written this wonderful book entitled Demythisfying Myths: Demystifying 19 Myths about India. This book does what our society and schools should have done in the Indian context. This book shatters the lies that we have been fed instead of truths that we should have been told.

After reading this book by Amit, I was literally shocked to confusion – why didn’t I try to inquire or question? So powerful and deep the roots of propaganda are in India. We simply believe what a so-called great person has written or said. However, the time has changed now and the establishment of false narrative hijacked by some historians to create a hegemony over intellectual India is being challenged by the likes of this author. Amit Bagaria is one of them who are constantly trying to uncover the truth and bust the hidden agenda of lobbies in the country. I will leave it here and move to the content of this book – Demythsifying India.

The book is a collection of some fundamental question that has not been answered yet in a convincing manner. 18 myths from our history – ancient and modern as well that has shaped the fate of India are discussed in the book. The author has picked the myths one by one and tried his level best to provide some logical and rightful arguments to eliminate the dark shadows of myths.

The book lets you travel with truth from ancient India to modern India. Putting some logic behind why Ram was not a vegetarian and also trying to show why India of today cannot be the India of the past, the author moves on to show how Gandhi become the father of the nation or it is worthy enough to call him as the father of our nation. The most interesting part of the book is when the author tries to uncover the secrets of some high profile deaths occurred in Indian history. Deaths of Subhas Chandra Bose, Shyama Prasad Mukherjee, Sunanda Puskar, Rajiv Gandhi and many more.

The book also focuses on the scams that happened in India during the UPA 1 and 2 and tries to compare them to some of the scams we don’t even know about. Moreover, putting a fresher perspective on the Kashmir issue and presenting a few facts and loaded information of history before the readers to make them understand the real issue of Kashmir on the ground and what they were told traditionally.

So, there are many things that we need to know and some of those things are there in the book by Amit. This book will be the guide to real history, real geography and real logical thinking for the Indians to a limited extent. The author could have accommodated more if he wanted.

The language has been traditionally easy in the book. It turns to facts after facts in a passionate way and the author has always been involved. Sometimes, you can also smell a bit of bias in his writing towards certain individuals and there is nothing wrong in it.

Conclusion:
While the book lacks pieces of evidence that certain readers would demand to see in a collected format, it is understood very easily that it might almost be impossible to provide such evidence because of lack of mainstream literature supporting it – for obvious reasons. Amit Bagaria has begun something that many authors don’t do – speaking truth. Let’s enjoy this journey that has annunciated in the mainstream literature after a while. You can get a copy of this book from Amazon India in various formats.

review by Guddu Ashutosh for The Book Blog

We write about the books we read and we read all the books.

Search Something on TBB